Vietnam is a land of contrasts and complexities from hill-tribe villages to dynamic cities, it is exciting and chaotic yet relaxing and everywhere you travel all your senses will be constantly challenged.

Vietnam is an ancient country with a diverse culture that has been influenced by invasions and occupation from the Chinese to the French and Americans. You can see this in the French colonial architecture of Hanoi and Ho Chi Minh City, the ancient temples that show Chinese influence in the north and Hindu origins in the south and the evidence of the Vietnam war in the tunnels and the museums and monuments that celebrate their heroic struggle.

Understanding the Vietnamese passion for food is key to understanding their culture, it is subtle in its flavours and as diverse as the country itself. The street food is incomparable, tasty, exotic and inexpensive and sampling local dishes with villagers and ethnic people is an unforgettable experience.

Food markets are an eye opening experience seeing new vegetables, exotic fruits and spices and a myriad of fish especially in the coastal regions.

Vietnam is a long narrow country bordered by Laos, Cambodia and the South China sea and contains 54 different ethnic groups all with different languages, culture and traditions.

The country has a tropical monsoon climate but there are regional variations with the north being driest in the Spring and Autumn and the south driest between December – April. It is cold in the north in the winter and hot and sticky in the south in the summer. 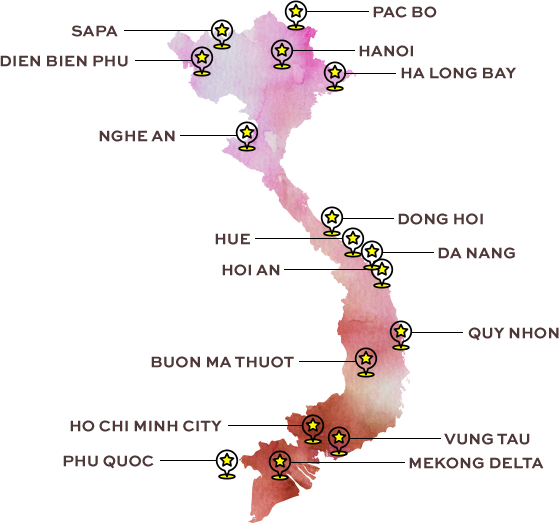 This city in the north western region of Vietnam sits in a valley surrounded by heavily forested hills. The scenery is breath taking but it has a special place in the hearts and minds of Vietnamese people as it is the site of the last battle in the Indo China wars where French troops were ..

END_OF_DOCUMENT_TOKEN_TO_BE_REPLACED

There is a main town but Sapa is really made up of the surrounding local villages. It started life as a colonial hill station allowing people to escape the heat and humidity as the air is cooler and the mountains covered in a soft mist. Magical rice paddies are cut into the craggy mountains and ..

END_OF_DOCUMENT_TOKEN_TO_BE_REPLACED

This is a province in north-central Vietnam bordering Laos and the Gulf of Tonkin. The coastal villages of Cua Lo, Quynh Nghia and Kim Lien are where Vietnam’s spiritual leader Ho Chi Minh was born and spent his early life. There are many museums and monuments dedicated to him. More remote is the Pu Mat ..

END_OF_DOCUMENT_TOKEN_TO_BE_REPLACED

Located on Vietnam’s north east frontier with China, an area of deeply forested limestone mountains, clear blue rivers and jade green rice paddies, this is where Ho Chi Minh crossed the border from China in 1941. The area is famous because Ho Chi Minh lived in Pac Bo cave when he first came back to ..

END_OF_DOCUMENT_TOKEN_TO_BE_REPLACED

The political capital of Vietnam, Hanoi is located on the banks of the Red river and is one of the most ancient capitals in the world. Noted for its well preserved French colonial buildings, ancient pagodas and unique museums it is a great place to explore on foot. The old quarter in the centre is ..

END_OF_DOCUMENT_TOKEN_TO_BE_REPLACED

Not yet on the tourist trail this town has 12km of white sandy beaches and is near the Phong Nha caves which are well worth visiting even though it is a long climb down and an even longer climb up!

END_OF_DOCUMENT_TOKEN_TO_BE_REPLACED

This UNESCO world heritage site located in north east Vietnam is world famous for its clear emerald waters and thousands of limestone island topped by rainforest. You will join a private junk trip for an overnight stay, and visits to private unexploited islands. You will see floating villages and markets and can explore secluded limestone ..

END_OF_DOCUMENT_TOKEN_TO_BE_REPLACED

Situated on the banks of the Perfume river Hue was the Imperial capital of Vietnam and the seat of the Nguyen Dynasty emperors. The Citadel is the major attraction, surrounded by thick walls and a moat, it was home to many palaces and shrines. The Perfume river is an ideal place for a dinner cruise ..

END_OF_DOCUMENT_TOKEN_TO_BE_REPLACED

This is a busy tourist destination but we have found ways of organising a private more relaxing visit. Over 2000 years old and a UNESCO World Heritage site, it is one of the most visited places in Vietnam. The architecture is a mix of wooden Chinese, French colonial, ornate Vietnamese tube houses and Japanese represented ..

END_OF_DOCUMENT_TOKEN_TO_BE_REPLACED

This was a French colonial port though it is known now for its wide sandy beaches. Da Nang is one of the fastest growing cities in Vietnam and is home to the famous Dragon bridge.

END_OF_DOCUMENT_TOKEN_TO_BE_REPLACED

Little known and not on the tourist route this capital of Binh Dinh province has probably the best beaches in all Vietnam. Surrounded by lush countryside this town is a source of exceptional sea food and well worth a visit.

END_OF_DOCUMENT_TOKEN_TO_BE_REPLACED

This city is the largest in the central highlands and is the regional “capital of coffee”. Close to the city are spectacular waterfalls especially Dray Sap which is in a stunning rainforest. Also nearby is Yok Don national park home to endangered species and the Ede and M’nong ethnic tribes, the latter live in June ..

END_OF_DOCUMENT_TOKEN_TO_BE_REPLACED

Formerly known as Saigon, this city on the banks of the Saigon river is home to 9 million people and is the financial and business centre of Vietnam. It is dynamic, vibrant, and busy does not describe the streets or the traffic, and almost never sleeps. The charm of the city owes much to the ..

END_OF_DOCUMENT_TOKEN_TO_BE_REPLACED

This agricultural region known as Vietnam’s rice basket is a vast maze of rivers, swamps and islands. It is home to floating villages, Khmer pagodas and rice paddies – boats are the main form of transportation.

END_OF_DOCUMENT_TOKEN_TO_BE_REPLACED

This seaside resort on a peninsula with ocean on three sides attracts many weekend visitors from Ho Chi Minh City as it is only 2 hours by car or 50 minutes by hydrofoil. A former French colonial town it has long sandy beaches and has an attractive mountain backdrop.

END_OF_DOCUMENT_TOKEN_TO_BE_REPLACED

The Phu Quoc region, which is located in the Gulf of Thailand off the coast of Cambodia, is made up of 28 islands many of which are uninhabited. The main island is Phu Quoc island where there are many resort hotels along the palm fringed white sandy beaches. Half of the island forms the Phu ..

END_OF_DOCUMENT_TOKEN_TO_BE_REPLACED

Send us some details so we can create your 100% tailor-made trip. We design bespoke experiences that are carefully matched to your exact tastes and wishes. We take care of every detail so you don't have to worry and give advice and recommendations that are totally right for you.

Any cookies that may not be particularly necessary for the website to function and is used specifically to collect user personal data via analytics, ads, other embedded contents are termed as non-necessary cookies. It is mandatory to procure user consent prior to running these cookies on your website.

We’ve got you covered!

With guaranteed 100% refunds for cancellations and comprehensive safety measures in place, there’s never been a better time to plan your Vietnamese adventure.

Find out more about our guarantee…